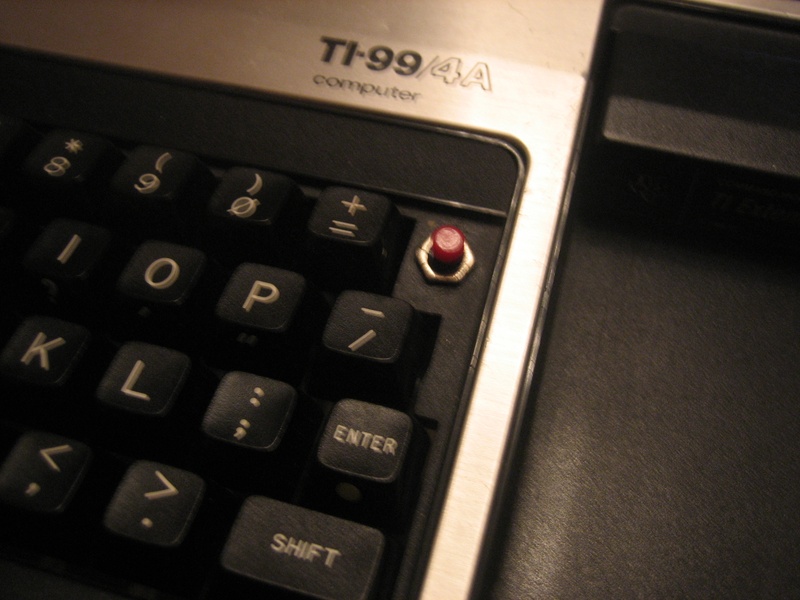 A silver black/console with a few modifications inside. Check out the cool reset button next to the "=" key.

Another modification was a german keyboard, which sadly got a non-working "E" key. We had to exchange it with an standard US-one. The third modification is unvisible from outside. The visual display is a lot clearer and has much higher contrast colors than standard consoles. All modifications were made by TI Errorfree Club. 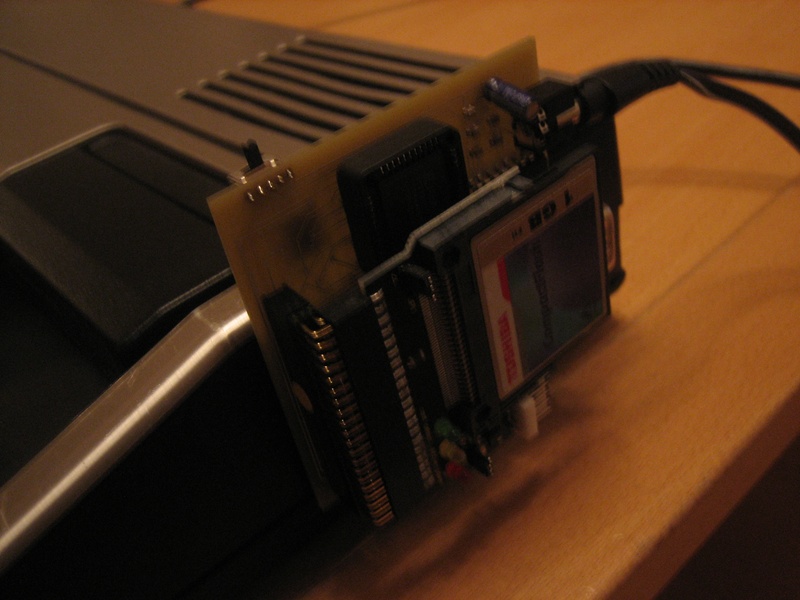 I am happy. With so much luck I have found a Atari Dig Dug cartridge on ebay, for less than 6 dollars with a buy it now option. I had never seen one before.

The only one missing of the officially released cartridges is Ms. Pac-Man (RX 8543).

One of the items we kept from our childhood was the collection of recorded MCs (music cassettes - tapes). On those tapes I have found audio music, private audio recordings from my home or school, and lots of self-recorded TI-99/4A programs.

Since I got my Texas Instruments PHP2700 Tape Recorder last week, I am reading in all the programs, mostly games, from these old tapes and saving them on my nanoPEB, for later usage.

It's TI Extended Basic and TI Basic stuff, english and many german programs. Between 20-30 tapes contain at least some programs.

As soon as I am finished with this task, the programs and games will get resorted into some fine disk images. I will publish all Freeware stuff here on this blog.

A hell of a lot Texas Instruments stuff arrived. Wow!

Yesterday my Texas Instruments PHP 2700 tape recorder arrived, fully functional and in pristine optical condition. At last I can save all the programs, I still have got on tapes from the 80s. Self written stuff from my brother and me. Stuff my dad has written and lots of programs, we have got from friends back then. The saving operation has started already. After everything is on the nanoPEB i will check the programs and search for unknown treasures.

Today 3 packages (!) arrived. The biggest and most pleasing is from Dave Howell from Erie, USA. Dave sent me a big part of his inventary, he has to give up. It's a giant box full of cartridges, manuals to them and a navarone cartridge expander. With his help my brother and I can now play again most of the games we did when we were kids. But we sure didn't have that much stuff. At last we both have Extended Basic and Editor/Assembler cartridges. Dave has a long story with the TI-99, as a teacher and as president of the Erie 99er User Group. I will ask him to write some lines for this blog, until then: Dave, I want to thank you for your confidence, I will care for the stuff the same way you did until now.

The other two packages contain stuff, i bought at ebay, some cartridges and a speech synthesizer.

I am still searching for a working compact flash card for my nanoPEB! Until then, the 32MB will have to do the job.

Isn't it wonderful that I will be on vacation on monday? My 3-day-weekend will be full of TI-99 sessions!

Today my nanoPEB finally arrived. Looks so cool and futuristic. The nanoPEB is an unofficial hardware expansion. I got mine from Jaime Malilong, I don't know yet if he is building this piece of hardware himself.

A nanoPEB is basically a nano (size) Peripherical Expansion Box for the TI-99/4A. It is hookep up on the side of the console, also called Sideport (Speech Synthesizer, Flex Cable,..)

It features a 32kb Memory Expansion, a serial RS-232 interface, an emulated disc controller with 3 emulated disk drives. You can store your disk image collection on the compact flash card, and mount a disk image very easy to the disk drive of your choice.

The wonderful part about all this: every part of it a 100% compatible replacement for the original hardware. 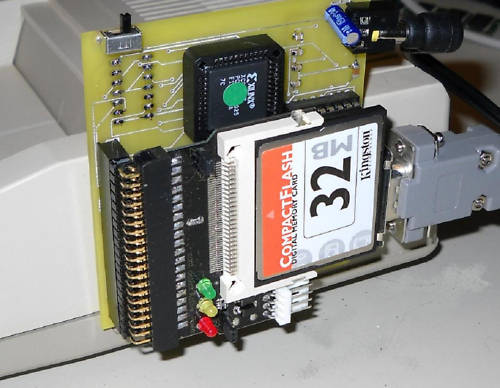 After 15 long years I am proud to tell that I own a TI-99/4A again! It really is in awesome shape. I got to try it out immediately after work. 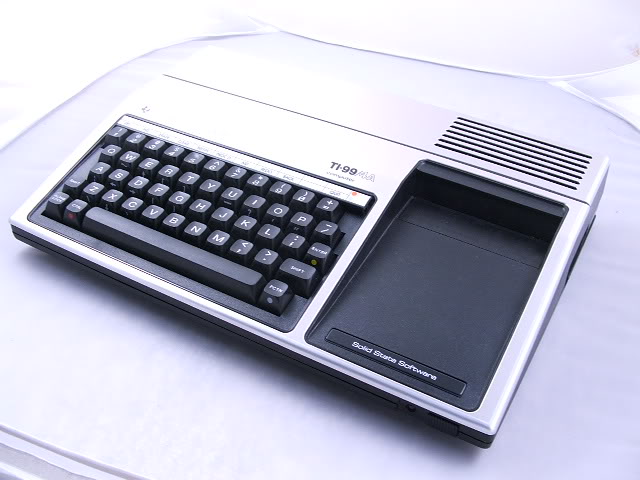 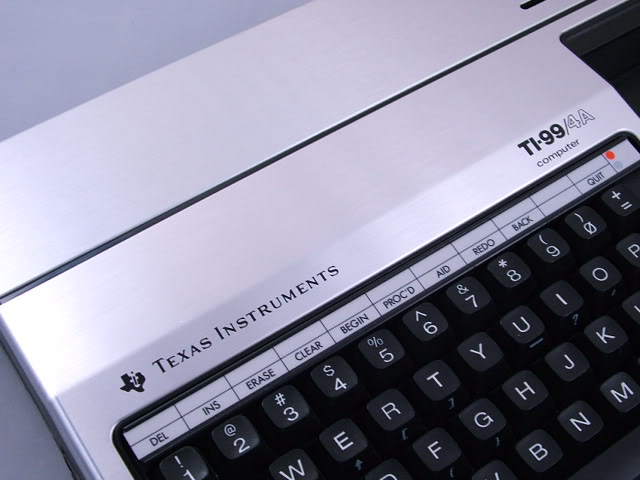 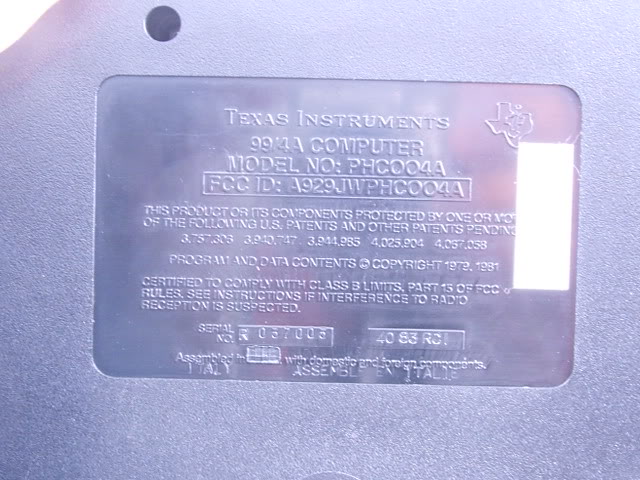 Still missing are the other orders: the nanoPEB, the Speech Synthesizer, several Cartridges, a WICO Atari Joystick Adapter and I even found someone to sell me an original Texas Instruments brownvinyl dust cover.

My name is Klaus and I live in Vienna in Austria.

When I was around 3 years old, it must have been the year 1983, my father bought a brand new TI-99/4A for our home with just a bunch of cartridges, a tape recorder and a pair of joysticks.

Until 1994, the TI-99 was the only computer for our home. The collection grew and grew.

Books, Magazines, Expansion Box, Memory Expansion, Disk Drives, Cartridge Collection, the Big Disk Program Collection. My mother used to call the Expansion Box “Mikrowelle” because it looked like one to her.

My brother and I were really interested in it, and programmed a lot in Extended Basic. Programming Assembler was simply too much for us, due to lack in propably both, english knowledge and technical skills.

In the year 1994 we demanded a IBM Personal Computer, an Intel 486, the TI-99 had to make room for his successor. We regret this step greatly, because it is all gone now.

In 2009 my brother, his little son and I attended the International TI-99/4A and Geneve User Meeting in Vienna for a few hours. What can we say? All three of us got in love with the real system again! Emulation is simply not the same. The other attendees were so kind and donated us a basic setup, a TI-99/4A with a pair of Joysticks and Speech Synthesizer. One of the members of germany even promised to send us some gaming cartridges.

Of course I wanted a Texas Instruments as well, and as time went bye, the demand got higher and higher. On the 17th october 2010 I bought one on ebay. It looks like brand new on the photos, it’s a black PAL model. Now I am waiting for the console to arrive.

I bought a Compact Flash Drive/RS232 Port (CF7+) as well, now called nanoPEB, via ebay! This item has not arrived yet.

Can’t wait to play with this stuff!